With the market currently plummeting into the abyss, there is one ray of sunshine.

We’ve all been waiting for this patiently and the TrezarCoin Devs have been hard at work. After this long wait, I’m happy to announce that on November the 20th it’s finally here!

The Trezarcoin Wallet v1.2 is officially released and ready for use.

While you’re waiting for it to download and reindex(explained below).

There’s a lot to go over, but before that feast your eyes on the wallet. 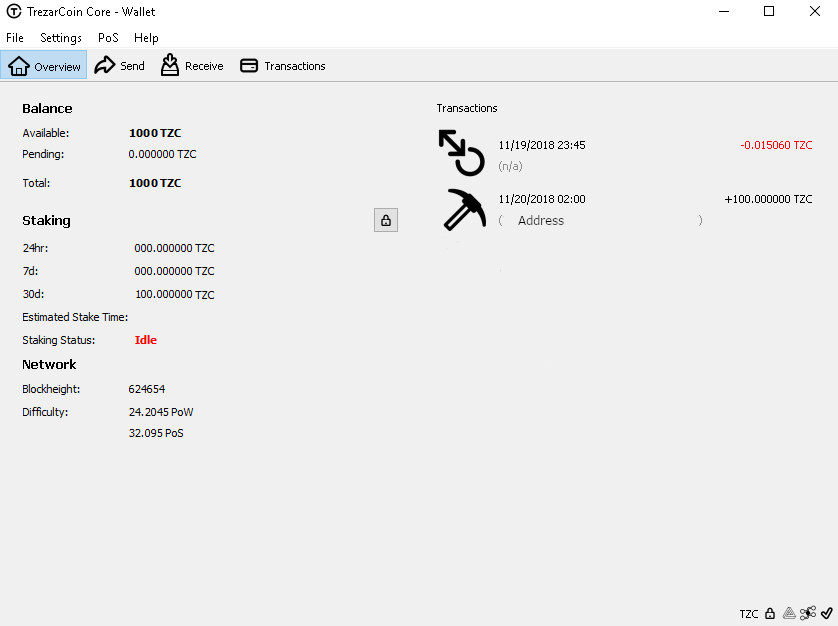 As you can see plainly, how staking is approached and seen has received a complete overhaul in this version. Due to popular demand, you can now see how much you are “expected to receive” in a given amount of time. Just to clarify, what is to be expected does not mean what is guaranteed.

As you can see however, in the screenshot, Staking Status is “Idle“.

it will immediately ask for your password and begin staking.

Once staking has been activated a few things will happen.

First Staking Status will become Active and the Estimated Stake Time will also display a time frame, for when a stake is expected after calculations are complete. These are illustrated below.

The second indicator that staking is now active, is that a symbol in the bottom right of the wallet will light up green.

The last thing available to you, even though I’m not sure when you would ever turn staking off. Is if you click PoS at the top you can now enable or disable staking. If you are on windows like me, you will get a notification from windows, letting you know if staking is active or not.

Now, on clicking PoS something else might have caught your eye, that’s right it’s called EasySplit. Honestly, the name speaks for itself, it’s an easy way to take coins form one address and split them evenly among however many addresses you choose.

After clicking the EasySplit button, go to Coin Control and select the address you want to send coins from, many of you should be used to doing this. Next click the address book button. 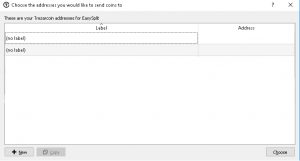 If you want to select multiple address make sure to single-click each address, double-clicking will select only one and close the window. From there enter the amount you want to use and click send.

What else is new

Something that many of have been plagued with for a long time, especially those that suffer from occasional power outages is a corrupted blockchain, not only is it a hassle to fix, it’s a time consuming issue and one that is always plaguing or discord channel.

Well no more! With v1.2 there the TrezarCoin Devs have implemented a new database structure to help prevent corruption of the blockchain due to power outages or unexpected shutdowns. This however, does mean that the whole database needs to be re-downloaded(reindexed).

SegWit introduced a new concept called “block weight.” This is a mashup of the block size with and without the signature data, and is capped at 4MB, while the block size limit for the base transactions remains at 1MB. This means that the SegWit upgrade is compatible with the previous protocol, and avoids the need for a hard fork.

It is important to note,  SegWit does not increase the block size limit, but it does enable a greater number of transactions within the 1MB blocks. The 4MB cap includes the segregated witness data, which technically does not form part of the 1MB base transaction block.

This is used for the lightning network. Now time for some techie talk to get into more detail.

Getting Started with Windows

This website uses cookies to improve your experience while you navigate through the website. Out of these, the cookies that are categorized as necessary are stored on your browser as they are essential for the working of basic functionalities of the website. We also use third-party cookies that help us analyze and understand how you use this website. These cookies will be stored in your browser only with your consent. You also have the option to opt-out of these cookies. But opting out of some of these cookies may affect your browsing experience.
Necessary Always Enabled

Any cookies that may not be particularly necessary for the website to function and is used specifically to collect user personal data via analytics, ads, other embedded contents are termed as non-necessary cookies. It is mandatory to procure user consent prior to running these cookies on your website.